We have been successful as your local county councillors in securing work to get Blackie Boy Roundabout and Dryburn Road fully resurfaced. The money has come from additional funding provided by the Coalition Government. Work is due to start in September.

Around Pity Me, Brassside and Framwellgate Moor we have 20 flower tubs, which I arranged to be put in place some years ago. Over the years I have had to find funding to keep these going, but this year, given the financial conditions and following chats to the council and local residents I have taken a different approach.

Some residents have planted out tubs themselves – Thank you! The rest I have personally been out and planted after getting a great deal from Finchale Training College for flowers.

Many residents have agreed and have already been helping with watering the tubs, but there are a few we still need help with along Finchale Road in Framwellgate Moor, so if you live nearby and see any of the plants wilting in the heat and live nearby , please help by giving them a drink – water of course.

In the meantime I am popping round with a big tub of water and keeping those not currently watered by residents in good health.

Several years ago I found out that the council planned to carry out modernisations to housing on Caterhouse Road – but only in 2016. This was simply unacceptable, so we requested as local Lib Dem councillors that work be carried out earlier. The great news is that work has been brought forward, and that Durham City Homes is doing a great job to modernise housing on Caterhouse Road and Lilac Avenue too.

Work is progressing quickly and we are confident that work to modernise on Hudspeth Crescent in Pity Me may well be done earlier after further discussions by your Lib Dem councillors. Well done to all the staff at Durham City Homes.

For the past few weeks I have been working on numerous council issues and can now get back to updating on the blog.

After four years of hard work it is great that the community centre at Fram now has a long term future.

Back when Labour threatened to close the centre I was livid and started work on making sure that closure would not happen.

First of all I managed to get the car park fully resurfaced, with some drainage work thrown in for good measure. Then we put in funding to get new windows in the centre.

Since then your Lib Dem councillors have supported groups using the Centre and the announcement yesterday of the transfer of the Centre to the Committee frees up £37,000 towards improvements which has come from your three local Lib Dem councillors local councillors Nieghbourhood Budgets (Mamie, Amanda and I) and the AAP. This money will help to improve the inside of the building including finishing off windows.

The Council after a lot of discussions will now spend £200,000 on major repairs to the roof, brickwork and heating system so that the centre has a long term future and the building, an iconic structure on the Front Street is protected.

I am proud of having helped save the facility for the future and really impressed with all the members of the community association past and present who have done a sterling job too including Colin Hillary the Chairman.

In addition, after the initial attempts by the Labour-run Council to close the centre, the work of council staff cannot be underestimated, many of them going far beyond that expected to help get us to this point.

It was all this effort which proved to Labour that we were not going to lie down and see our community infrastructure destroyed by Labour politicians, and I believe this made the powers that be recognise that they had to help, not dismantle local community facilities in our area.

A bright future for Framwellgate Moor Community Centre starts now. Please call in to the centre to see what’s going on, join one of the various groups or get in touch to join the committee – all are welcome and going forward it will be the place to be seen in Framwellgate Moor as the next phase – Expansion, begins in the coming months and years. Hurrah!

Work to build the new parking bay we have funded using local neighbourhood budget continues at pace. The work started last week, and when finished there will be a new 40m long area for parking in this congested area. We continue to work to get further improvements in other parts of the area and look forward to announcing further news in due course.

Below is a pdf version of the Caterhouse Pit Nature Reserve and Wildlife Corridor petition.

Please help get as many people as possible to sign the petition and return to the freepost address we have provided. (Story below in previous post.)

PETITION TO SAVE CATERHOUSE PIT

Changes to parking at the shops on Beech Close are currently being advertised. The traffic regulation order which your local councillors have been trying to get in place for a long time now, will allow for the diagonal parking bays to have 3 hour restrictions. this will ensure that there is more parking for passing trade, which has been affected by people parking  in front of the shops and then disappearing off to the hospital or into town making it impossible for customers to park up.

If there are objections to the order it will go before the highways committee, if not, the work which we have provided funding for from local budgets will go ahead in the coming months. This is another example of how your Lib Dem councillors are seeking to make it easier for businesses to trade in our area.

As part of our plans to build a new parking bay on Priory Road in Framwellgate Moor, I have worked with Amanda and Mamie to get a large number of trees planted across the grassed area along Finchale Road. The new trees look great, will benefit wildlife, help soak up water and even reduce pollution levels, and help reduce the impact of losing some of the grass for the parking bay. Work should start on building the new parking in the coming months and is being paid for from your councillors local neighbourhood budgets. Residents have raised concerns about problems at this location for a  number of years and your Lib Dem councillors are pleased they have been able to help improve the area.

The public footpath between Hudspeth Crescent in Pity Me, and the Electricity Substation will be closed from the 14th April for essential works to be carried out to the substation. A diverted route will run through Hudspeth Crescent and the map below shows the alternative route.

Any problems feel free to email me. The first closure will be for around 2 weeks starting 14th April, with two further closures in the summer around the 22nd July and 18th August.

The Centre has plenty to do over half term. Your Lib Dem councillors continue to to support the Centre. 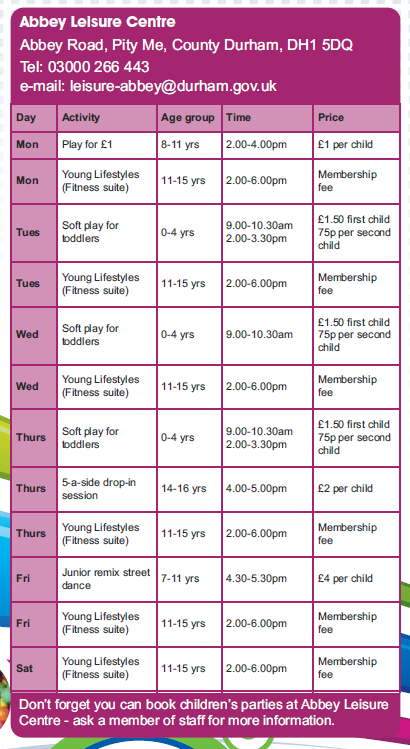 Call in the centre to find out more.