So what has DCC got to hide on the day there are reports about mileage claims in the papers?

Take a look at the members expenses page. For some reason the 2016/17 councillor allowances page has been replaced by a picture of Rory Bremner. I know DCC has been referred to as a comedy act in the past, perhaps they are trying to have a laugh over the use of taxpayers money.

Not a clue how long it will take to change it. 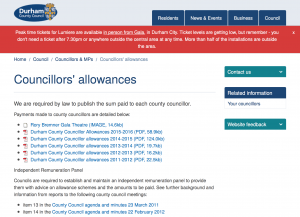 Please support Amanda on Thursday. It’s time to end decades of Labour MPs being elected in Durham City and have a proper opposition MP to the Tories instead of one of Corbyn’s Labour MPs.

Needless to say I have raised this as a complaint. The road is in a right state and needs urgent patching work as a minimum. Update: Pity for the Council that its right outside the polling station! 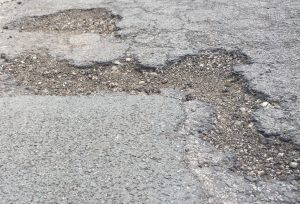 A few years ago we managed to get the Council to agree to a major program of changes to tackle sickness absence and attendance management issues at the Council.

The good news is that sickness absence is falling, although it is still way too high at over 10 days per employee a year.

The bad news, no the appalling news, is that over 200 managers still have not completed the compulsory training they are required to: 12 months after being told to do it. This training makes sure that they understand when to refer someone for example to occupational health and how to deal with a sick employee in a proper manner. Previously some employees were not referred for months when there were clear issues – one employee wasn’t referred to occupational health for 300 days!!

The Council is continuing to let down employees by not making sure that all managers are properly trained. Surely 12 months is long enough for a manager to have done the compulsory training. Personally, apart from holidays and their own sickness, a month should have been long enough to book a few hours of time in to do the course on the council’s computer system. It’s not a huge ask to put the computer on and do it after all.

I am absolutely certain that not a single manager will have seen any serious repercussions from failing to carry out the training.Offiers at today’s meeting could;t answer what the repercussions were for someone failing to do the training. Compulsory means compulsory. Any manager not having done the training is letting down their staff and this County. The Labour cabinet members responsible should get off their gold plated chairs and have a right go at senior management, much as I did today at our Scrutiny meeting.

Labour-run Durham County Council is under pressure to help local bike
shops. Lib Dem campaigners have discovered that local firms have been
priced out of a cycle scheme in favour of a national firm.

Many big employers are involved in a salary sacrifice scheme which
allows employees to pay for a bike through national insurance rebates.
Durham County Council offers this scheme to its staff.

Two years ago local bike firms in County Durham were accessing the
council’s scheme. However a new contract with a national chain was
introduced. Whilst the local firms could still get involved, they
could only do so if they sold different bikes than the national chain
and had to pay a huge 15% commission.

Lib Dem councillor Mark Wilkes has found out that most of this
commission is pocketed by the Labour-run County Council. He commented
“Local firms have been priced out of the market by what is in effect a
back hander. This was not a requirement of the original tender. The
Council should immediately remove the 12% they are taking from this
scheme so that it is worthwhile for local firms to get involved.

A council spokesperson said of the commission “The income contributes
to the council’s costs for managing and promoting the scheme.”

The scheme has so far helped 205 employees take up the cycle program.
Almost all of those taking up the scheme in the last two years have
gone through the national company.

Salary sacrifice schemes like this one can be great at promoting
sustainable travel. The bike scheme helps to cut pollution and improve
health by getting people out of the car and onto bicycles.

However Lib Dem campaigners state that this should not be at the
expense of local firms who are in effect priced out of being involved.

Cllr Wilkes points out “By taking this commission the Council is
removing any chance that local firms can make money. Indeed we have
been told that to be involved actually costs them money as their
margins and costs are swept away by the council taking a cut.”

What makes campaigners even more angry is that the back hander was
kept secret until a local firm mentioned they were having to pay a
commission to the national provider.

Cllr Wilkes added “I imagine that not one of our local firms actually
knew the money was going back to Durham County Council!”

The Labour-run local authority has extended the national contract for
a further 2 years, but Lib Dem campaigners are calling on the Council
to amend the terms and remove the 12% cut they take so that local
firms can afford to get involved.

Residents of  Barrington Close have been included in the Parish Council election despite not being in the Parish.

When I was checking through the electoral roll for non parished parts of our area it suddenly dawned on me the Barrington Close wasn’t there.

I called the head of electoral services who ran a check only to discover the Council had registered the street over five years ago as part  of  Framwellgate Moor Parish area.

The Council must now issue new polling cards and notify residents, including those with postal votes that they can’t vote in the Parish election.

Had I not seen this the whole election might have needed to be run again. Thankfully I’m told these residents haven’t been billed for parish council tax, but I will still be checking to make sure.

Our campaign to get roads in this part of Framwellgate Moor has been successful. The Council has confirmed that in the Spring/Summer this year all these roads will be resurfaced.

This is great news after our repeated requests for action including patching works.

We have asked for various areas to be checked to see if additional patching is required first and will be checking out if anything else should be done as well.

If the Labour-run council was investing properly in our roads we would have no doubt already seen these streets done, thankfully our continued pressure has ensured they stayed at the top of the list for action.

The next part of Dryburn Hill footpath rebuild works has started. We have been working on getting the area done for many years and last year the first section was completed. This year after being told only part of what was left was being done we decided to provide some funding to get a bit more done.

After initially being given prices which were way over the top by the Labour-run council, we challenged the quotes and got the price halved, and now another stretch is to have the flagstones removed and get a full rebuild.

This leaves one more part which we will be pushing for action on in the coming year.

It would appear that the campaigning has paid off. A new deal may be on the cards for teaching assistants. Council officers will be visiting schools to determine what responsibilities TAs have in each school to find out if they are graded properly.

Something we suggested at the very beginning of this mess and which Labour flatly refused to do.

Well done to all those teaching assistants who have fought against labour’s dreadful attempts to cut their pay.

Of course this could just be Labour seeking to kill the story before the local elections, so as we have since the start Lib Dem councillors will continue to lead the political campaign until a fair deal is brought forward.

Not satisfied with their attempts to cut TAs pay by upto 23%, they have blocked a motion by my fellow Lib Dem councillor Owen Temple, which would have seen TAs reinstated until their new contracts are redetermined.

The council has used some ridiculous excuses in the past to stop democratic debate over this and other issues but this one really took the biscuit!

Firstly they wouldn’t allow the issue debated at full council next week because it was too political! Yes – a political meeting, where motions are put and debated can’t debate – the argument that its coming up to an election. Yet election restrictions don’t start until days after the full council meeting. A disgraceful attempt to stunt democracy by Labour. It’s getting like North Korea down there – except perhaps I’m not allowed to say that either……

The second reason put by the councils legal team on why they won’t allow the motion to be debated is that it might put Labour councillors at risk following the totally unacceptable death threat against them sent to Durham Police.

Hold on a minute – so someone sends a letter to the police and democracy is immediately shut down – No chance – we live in a democracy and we will not allow threats to stop proper democratic debate. And we will not go down without a fight. This is just an excuse so Labour councillors don’t have be forced to vote again in the appalling manner they have become used to – against teaching assistants, against the people of County Durham.

The final reason we can’t have a debate on this issue  – which we are still trying to get our heads round is that we can’t reinstate teaching assistants because we might make an unlawful decision.

Owen’s response to this is worth repeating here in quotes:

“If that is the case, how could we have been given a vote in the first place, because that carried exactly the same risk? And if the termination of contracts cannot be withdrawn, what exactly is the goal of the negotiations which council, unions and Teaching Assistants are currently engaged in? Is it any wonder that Teaching Assistants think their dispute has just been kicked into the long grass beyond the election, and that once the election is out of the way the Labour run council will just return to business as usual?”

Never a truer word spoken Owen – this is another attempt to shut this issue down, but I do not believe the public will accept it. Labour’s disrespect for these public sector workers begs the question:  What is the point of Labour? **

Teaching assistants are set to march on the 25th through Durham to Redhills. Support them by joining them if you can. If you can’t make it, please help make sure you spread the word that regardless your political beliefs, in this May’s elections, a big message is sent by kicking Labour out of County Hall once and for all.