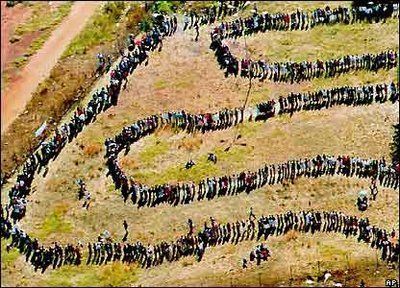 The queues of people we see in many countries at election time remind me of the importance of voting. In Zimbabwe an empty plot of land had 8000 voters registered – yet despite the clearly corrupt nature of many voting systems overseas, the queues can still be seen.

In the UK successive labour and Conservative governments have taken our vote for granted. The last Labour government was elected by less than 22% of eligible voters. In simple terms for every person who voted Labour, almost two voted for other parties and two did not vote.

The voting system in County Durham has allowed Labour to stay in power for decade after decade. If we are to change this monopoly we must tell everyone to go out and vote on May 1st. I believe we can make Durham a more democratic and more efficiently run County with better services. The more Liberal Democrats we have, the more chance we will have to bring democracy back to Durham and the rest of Britain.

Then it will not be possible for our country to be forced into illegal wars which destroy lives and waste billions of pound of our money.

This site uses Akismet to reduce spam. Learn how your comment data is processed.